Concepts of Pranayama in Yoga Sutra of Patanjali – 2 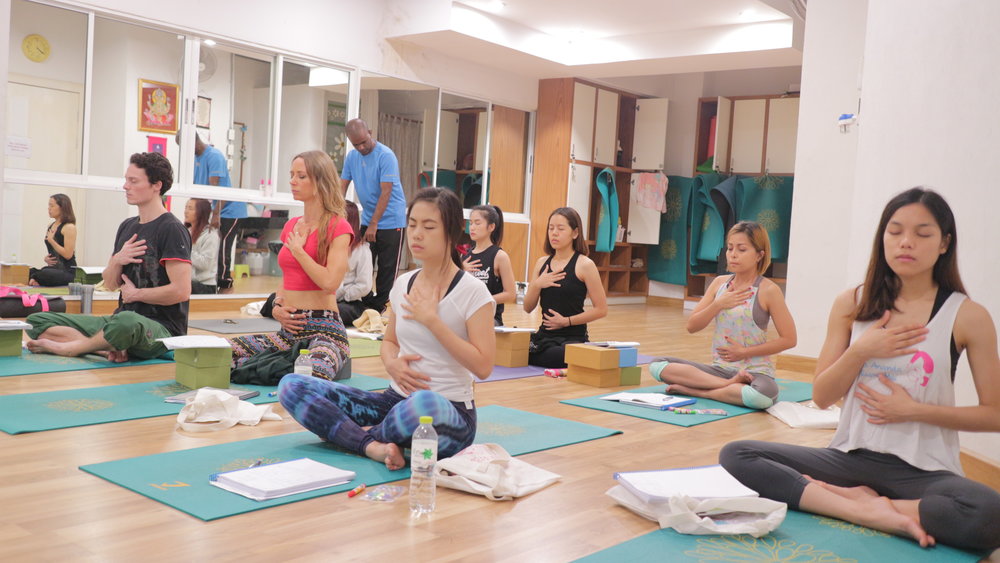 Before describing pranayama as part of eight limbs of Yoga or Ashtanga Yoga in second chapter, Patanjali mentioned Pranayama like practice in first chapter of yoga sutra (Pracchardanvidharanabhyam va pranasya 1:34) while describing the methods of Chitta Prasadana or how to cleanse Chitta (mind). So the first purpose is very clear of doing pranayama or pranayama like practice in yoga is to get the mind purified.

Patanjali puts Pranayama as fourth step of Ashtanga Yoga. He defines, explains all about it and benefits in 5 Sutras from 2:49 to 2:53:

At the very beginning Patanjali starts the explanation of pranayama that, it should be done in sitting in Asana only (Yoga Sutra 2:49). He also makes clear by word “tasmin sati” that the Asana is the prerequisite for pranayama. Contrary to that Hathayogic pranayamas do not have that kind of necessary relationship between Asana and pranayama and Hatha Pradipika (2:53) said that Ujjayi can be done while standing and walking.

The word or term “Tasmin Sati” before explaining pranayama in yoga sutra stands for 3 meanings:

1. Dvandvanbhighata – means pranayama should be practiced only after one becomes unaffected from conflicts (Dvandva), which is achieved by getting mastery over Asanas.

2. Asana – means pranayama to be done always in sitting in Asana and mastery over it not required.

In both meaning one thing is common that, pranayama should be done often adopting an Asana. And pranayama practice will be much effective when mastery over Asana has been achieved.

3. Third meaning of word is that – while being still in asana and when all conflicts are resolved (dvandvanabhighata), respiration itself automatically and spontaneously leads “gativiccheda” the break in regular rhythm of inhalation and exhalation and pranayama happens. As result of effortlessness in asana (prayatna-shaithilya) and merging the awareness in infinity (anant-samapatti) pranayama happens spontaneously.

Gativiccheda has two meanings. First – any disruption or break in regularly or rhythmic patterns of breathing. Second – total pause or cessation in movement of breathing.

Both meanings are applied in pranayama as retaining breathing (kumbhaka in Hathayoga) and modifications of inhalation and exhalation.

As Hathayogic pranayamas Patanjali doesn’t use the terms like Puraka (inhaling), Rechaka (exhaling) and Kumbhaka (retaining). If word ‘Gati’ means regular rhythmic mode of movement of respiration then word ‘Vicchheda’ means any alterations or bringing change in the regular breathing. So Viccheda doesn’t mean only retention or Kumbhaka alone, but controlled inhalation and exhalation also.

Another difference – Patanjali does not name pranayama as Hathayogic type of pranayamas which are 8 types.

As described by Patanjali, Gativiccheda in swas & praswas is pranayama and that possible modification or Gativiccheda of normal respiration can be of 4 types. The term vritti in Sutra can be applied to 3 of them so full name will be:

Here the main thing to be understood is ‘Gativichheda’. As it its mentioned earlier Gativiccheda has two meanings. First – any disruption or break in regularly or rhythmic patterns of breathing can be taken as prolonged breathing. Second – total suspension in movement of breathing.

In these cases here we take first meaning only and three varieties of pranayama would be:

1. Bahya Vritti – where exhalation alone is made prolonged and finer and inhalation remains normal. Hatha Yoga takes it as Recheka.

2. Abhyantara Vritti – where inhalation alone is made prolonged and finer and exhalation remains normal. Haha Yoga takes it as Puraka.

3. Stambha Vritti – where breathing is suspended, whether after inhalation or exhalation it depends on practitioner. Hatha Yoga tased it as Kumbhaka.

Since Hathayogic Pranayamas are popular, so above described techniques to practice all alone can be objected and many say that Patanjali talks about three phases of one cycle of Pranayama. By same logic they say that Kumbhaka or suspension of breathing is essential in Pranayama practice.

These three varieties of Pranayamas are regulated in three ways which Patanjali mentions as Desha, Kala and Samkya.

1. Desha means region which stands area up to which movement of air or Prana is felt while breathing in or out. In inhalation it can be taken as felling of coolness of breathing, depth of breathing up to different part of the torso or movement of Prana which can be felt in ant part of body. More the force of the breathing the Desha will be greater.

2. Kala means time required in each and every phase of breathing. The Kala becomes prolonged with slower breathing. Desha and Kala are interrelated and go opposite to each other. If one prolonged other becomes reduced.

3. Samkya means number which indicates number of repetitions or Pranayama. The more numbers of Pranayama done the more effective will be the practice, which has been found by research and practitioners.

Other terms described in sutra which are already mentioned earlier are Dirgh (prolonged) and Sukshma ( subtle or fine) are not independent qualities but whenever any of three pranayamas are done these two applied to achieve Desha, kala and Smakhya.

The Chaturtha or fourth type of pranayama described by patanjali as “Bahyabhyanyara-vishayakshepi chaturthah” means absence of external (exhalation) and internal (inspiration) mode of behaviour is Chaturtha.

The term Vritti is absent in this Sutra. Here Vishaya stands for Vritti and Akshepi means excluded which means absence of Vrittis. It seems in this type of pranayama suspension of exhalation and inhalation is happening spontaneously. This can not be done wilfully and can be achieved by long and years of practice of pranayamas.

The benefits or result of pranayama are described by patanjali are two:

1. The practice of pranayama removes obstacles on the inner illumination potentiality which is covered by number of layers of unwanted thoughts, past memories and social or individual conditionings. These all conditionings are known as Samskaras in Yoga. The potentiality of getting ultimate knowledge or self realisation is the purpose of Yoga and practice of pranayama facilitate it.

2. The Practice of pranayamas facilitate ‘Dharana’ the ability to focus the mind on a region or on an object. In other words we can say that the pranayama practices are essential for the preparation of concentration or meditation.