Yogic Concepts of Breathing or Pranayama – 1 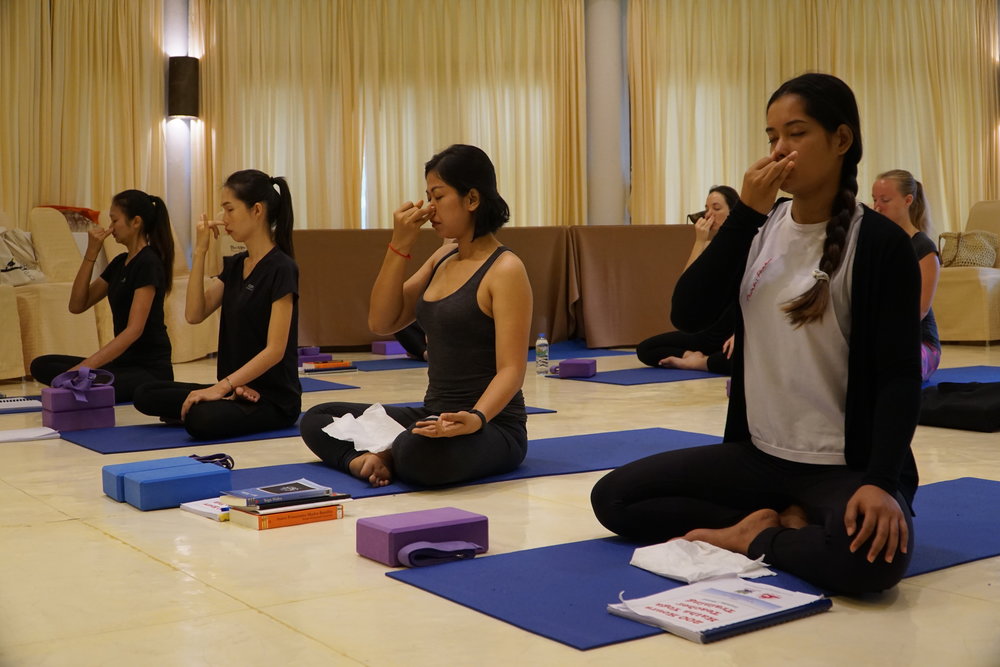 Breathing is a normal and natural phenomenon of human physiology, which is controlled by autonomous nervous system. Breathing or ventilation consists of two parts, inspiration and expiration. During inspiration the diaphragm and the external intercostal muscles contract. When diaphragm moves downward, it increases the volume of the thoracic (chest) cavity, and the external intercostal muscles pull the ribs up and outward, expanding the rib cage, further which increases the chest volume. This increase of volume lowers the air pressure in the lungs as compared to atmospheric air pressure. Because air always flows from a region of high pressure to lower pressure, it travels in body through nostrils, throat, larynx and trachea into the alveoli of the lungs. When diaphragm and external intercostal muscles relax, it restores the thoracic cavity to its original (smaller) volume, which forces air out of the lungs into the atmosphere. Whereas breathing is involved with the movement of air into and out of the thoracic cavity, respiration involves the exchange of gases in the lungs.

The respiratory center in the brainstem is responsible for controlling a person’s breathing rate. It sends a message to the respiratory muscles telling them when to breathe. The medulla, located nearest the spinal cord, directs the spinal cord to maintain breathing, and the pons, a part of the brain very near the medulla, provides further smoothing of the respiration pattern. This control is automatic, involuntary and continuous entire life. We do not have to consciously think about it.

The respiratory center in brain knows how to regulate the breathing rate and depth by measuring the amount or percentage of carbon dioxide, oxygen and acidosis (blood acid) in the arterial blood. There are receptors, called chemoreceptors, in the arch of the aorta and throughout the arteries that send signals and feedback to the respiratory center to increase or decrease the breathing rate depending on the condition of these metabolic variables. For example, when we exercise, carbon dioxide levels increase significantly which alert the chemoreceptors, and notifies the brain’s respiratory center to increase the speed and depth of breathing.

Breathing is most unique as compared to other functions of the body, which can also be regulated voluntarily. Speaking, singing and playing some instruments (flute, saxophone, trumpet, etc.) are good examples of the voluntary control over breathing. Anatomically equilibrium (balance in breathing pressures) of breathing can be easily disrupted by fatigue or prolonged sympathetic (excitatory) nervous system arousal as seen with stress.

In Yoga breathing is more than a normal physiology. Scientific research on Yogic Breathing techniques shows that – regular practice of yogic breathing enhances relaxation by reducing stress, and improves organ function. It may reduce or alleviate some of the chronic negative effects of stress. This stress relief is one of the reasons of practicing pranayama in modern days.

In this blog I will try to explain Yogic Concepts of breathing, and will explain that it is just simple respiration or more than that as Yoga describes.

In Yoga all practices related to breathing called ‘Pranayama’. The practice involves voluntary or behavioral control over breathing. Yogis knew the relation between respiration and changing emotional states of mind long before the birth of modern science. In India these practices and the theories behind them have been extensively developed in the traditional Hatha Yoga. The Yoga texts describe the practice of different pranayamas for various reasons, but the ultimate goal is to bring control over modifications of the mind (vrittis) through an eight- fold path of yoga.

The word pranayama is composed of two different words – Prana & Ayama or Yama. Prana, which means ‘breath’ as well as the vital/subtle energies in the human body, and Ayama, means ‘to regulate by conscious control’ or Yama means ‘to restrain’ it. Together the words refer to the method of conscious breath control.

It is well-known fact in yogic system, that Prana has larger meanings – it is not just breathing or air.

Prana is a universal concept and a vital force which sustains entire universe including all living and non-living beings. Word Prana is made of two syllables, ‘Pra’ means force and ‘Na’ means in continuous motion. Prana works in all levels of existence and is behind every motion, action, thoughts, and in every level of mind and body in an individual. As per scientific researches it is a multidimensional energy: a combination of electric, magnetic, electromagnetic, photonic, ocular, thermal and mental energies.

Prana is the one behind fundamental law of creation, growth and decay or destruction. As per Taittiriya Upanishad human body or existence is made of five sheaths (Panch-Koshas) and prana resides in Pranamaya Kosha. Pranic field (Aura) in in human body has been proved and measured by modern Krilian photography too.

In Pranamaya Kosha or Pranic body there are pranic channels through which prana flows in entire body which are called Nadis and prana is stored in Chakras. In Hatha yogic and tantrik system there is so much emphasis to keep nadis clean for the sake of proper flow of prana in entire body. Hatha Yoga recommends several cleansing processes and Nadi Shodhana (practiced as type of Pranayama) techniques to keep nadis clean. Pranayama practices fulfill this purpose too.

Prana is an essential part in all being, everyone is born with certain level of prana and we sustain it entire life. We can increase/decrease it by healthy/unhealthy life style. Level of prana depends on the air we breathe, the food we eat, the thoughts we think and the action and lifestyle we lead. Whenever Prana leaves the body, we are declared dead.

As per Patanjali’s eight-fold path or Ashtanga Yoga (not so called Ashtanga-Vinyasa system), Pranayama comes in forth and in Hatha Yoga (especially Hathapradipika) it comes second steps of the classical science of yoga.

Highly accomplished yogis developed Pranayama techniques in ancient time by experiencing and experimenting pranas and its influence on physical and mental level. Breathing is the closest physical form of prana and they noticed that whenever any short of change happened or experienced on physical and mental level – breathing gets disturbed immediately. Same time they experienced that whenever they bring restrain or control (yama) on breathing, especially mind gets calmer and it helps in providing relaxation on physical level. After finding this relation yogis realized that breath and mind are interdependent. To control the fluctuation of mind directly has always been a difficult task yogis found breathing is a tool to achieve it.

As explained in Patanjali Yogasutra: Patanjali describes pranayama as:

“Afrer mastering or accomplishing asana when pause or regulation in inhalation and exhalation happens, it is called pranayama”.

‘Tasmin sati’ word in yogasutra indicates that previous steps of yoga practice – yama, niyamas, asanas should not be skipped. So the order should be maintained to attain the regulation or pause in breathing. As per patanjali’s system – if order of practices yamas, niyamas, and asanas followed, fluctuations on mental and physical levels get minimized and one becomes perfectly ready to practice pranayama. Or we can say pranayama happens.

Patanjali describes four different types or phases of pranayamas. I will be talking about them in next blogs to come with types of pranayama.